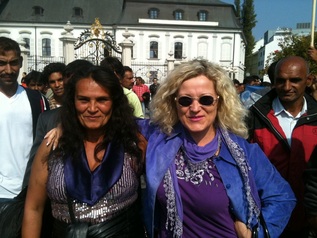 The Gypsy race originated in the northern part of India near the Punjab Region [Demand 1980:31]. They refer to themselves as Roma which has mistakenly been called a cognate for wanderer. Roma is instead derived from the word, "Rom," meaning man. The Gypsy language is called Romani and is derived from the oldest written language, Sanskrit.

The myth that the Gypsies never had a country of their own is not logical or factual. The fact that these people had a language, an army, and shared common interests gives great evidence that a country did exist.

The speculation that they have always wandered and were nomadic has been disputed by the Gypsy scholar, Dr. Jan Kochanowski, himself a Gypsy. He has concluded that the Roma people were originally sedentary and did nut wander and were not a nomadic people .

...most of the speculations can the origins of the Roma are unfortunately based on traditional linguisticsly reached a conclusion which had previously been neglected or not recognized, namely that a people or group of tribes who speak a common language must have lived in one country for many centuries, sharing common interest, a common administration and

T. z. an army: in short, that they must have formed a State.It thus followed that the Gypsy people could not have been of nomadic origin. What is more, an analysis of the Romani vocabulary shows that its original speakers were more the 'home-loving' type: we find no words like cave, tent, bison, but on the contrary words like house, cow, pig, etc. [Kochanowski 1980:26]

If this is true, and we can assume it is, what happened to this State of the Roma? To find this answer we must yo to the 11th century in the Punjab Region of northern India.

It was in the 11th and 12th centuries in the Punjab Region that great turmoil arose. This region was constantly being invaded by Afghanistan resulting in many wars with the Romany people. The Afghans were successful in winning a major battle that caused the Roma to split into three groups. Two of these groups scattered in the Punjab Region. The third group, which called themselves Romane Chave [the sons of Roma] set off across Afghanistan toward Europe [Kochanowski 1980:27]. It was difficult crossing Afghanistan but the Roma were shrewd and cunning. As Dr. Kochanowski relates, "At this period, the two major factions of Islam, the Shiites and the Sunnites, were almost perpetually feuding; all the Roma had to do to ensure their free passage was to tell the Shiites that they were being pursued by the Sunnites and vice versa" [Kochanowski 1980:27]. Thus we have the beginning of the Roma on the move traveling through Afghanistan to Turkey, Greece and eventually to all points of Europe.

To understand how European prejudice developed against Gypsies we must explore the European western mind in the medieval period. When Gypsies first appeared, Christianity had shaped the doctrine of war between light and dark and personified the white angels against the black devils. To the church the Gypsy culture was non-acceptable and their dark skin exemplified evil and inferiority. Hence in western Christian Europe the dark-skinned Gypsies became victims of prejudice as a result of this Christian doctrine.

The language of the Gypsies was another factor which bred prejudice. "The genuine mystery and widespread ignorance concerning the origins of the Gypsy language provided sufficient grounds for immediate suspicion and dislike" (Kenrick 1972:20]. A documented remark made by a Spaniard shows a typical response, "When I go to the market there in the corner stand the accursed Gypsies jabbering to each other in a speech which I cannot understand." (Kenrick 1972:20]. There were many who believed the Gypsy language was nothing more than a kind of gibberish invented to deceive others.

Upon entering Christian Europe, the Roma realized much resentment was building because of their skin and social structure. So, they fabricated the story that they were descendants of the Egyptians who had enslaved the Israelites, explaining that for this reason God had condemned them to perpetual wandering. (Kochanowski 1980:25]. The Roma knew that many European countries were persecuting the Jews and that this false story would take some of the pressure off them. The story worked and the Roma became known as "Gypsies" derived from the word Egyptian. Because of this story the Pope and King gave them letters of protection and they were allowed to travel about and practice their way of life. Soon, however, the tides turned against them as Church and kings became angered and suspicious of their carefreeness. The Church did not approve of fortune telling and the Gypsy customs, morals and way of life contrasted with the non-Gypsy Europe. This was the beginning of prejudice and persecution that exists until today.

Gypsy people were open for attack by Christian clergy and Moslem priests alike because they did not practice one or another of the prevalent religions of that region. Because Gypsies were regarded as nonreligious people they were scorned and held in contempt by religious sects wherever they traveled.

Early chroniclers wrote with revulsion of the blackness of Gypsies. The monk Cornerius of Lubeck, reporting on Gypsies he had encountered in 1417, refers to their "most ugly faces, black like those of Tartars." (Kenrick 1972:19). Another monk, Rufus, also of Lubeck, wrote disapprovingly of their dark skins. And, in both the Italian and Dutch languages there evolved the saying, 'black as a Gypsy.' (Kenrick 1972:19).

Link for my work with ROMA'S in SLOVAKIA